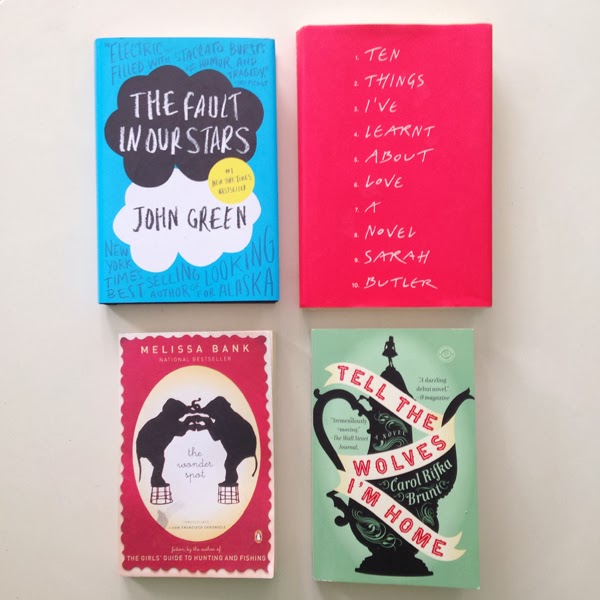 For weeks 4 through 6 I found myself breezing through my books, but then the last two weeks were a little harder to find time to read. That said, I read 4 really great books this month!
The Wonder Spot by Melissa Bank This was the first book that I read this month and I really liked it. I picked it up because it's by the same author of  "The Girls Guide to Hunting and Fishing" which I loved. The main character Sophie Applebaum is somewhat of the black sheep of her family and it's about her journey in New York City over the course of 25 years, trying to find love in a disappointing world.


Tell The Wolves I'm Home by Carol Rifka Brunt This book is about a girl named June who is quite the quirky girl who only one person truly understood and that was her uncle, the renowed painter Finn Weiss. He died far too young, and her world is turned upside down, but lucky for her, there is someone waiting in the wings to help her through it and make her question everything she knows. I was hooked pretty quickly and think I read it within two nights in the tub.

The Fault in our Stars by John Green This book was a bit of an easy read, and honestly felt a little young to be reading, but that said, I did really enjoy it. It's about a young teen girl named Hazel, that has been diagnosed with lung cancer and goes to a support group and meets a charming boy named Augustus. I don't want to give too much away, but it's a sweet love story and I would recommend it!

Ten Things I've Learnt About Love by Sarah Butler This was the last book I read this month, and to be honest, I found it kind of slow at first, but I pushed through and am glad I did. It's a story about a woman who has just returned home to London after months of travelling abroad. She gets home just in time to say goodbye to her father who she finds out is dying after being gone for so long. It's also about a man named Daniel who hasn't had a roof over his head in years, and spends all of his time searching for his daughter. It's a really great read for fathers and daughters everywhere.

11:51 AM
Unknown
odds and ends, our daily lives