Home » our daily lives » travel » Our photos from Bangkok.

Our photos from Bangkok. 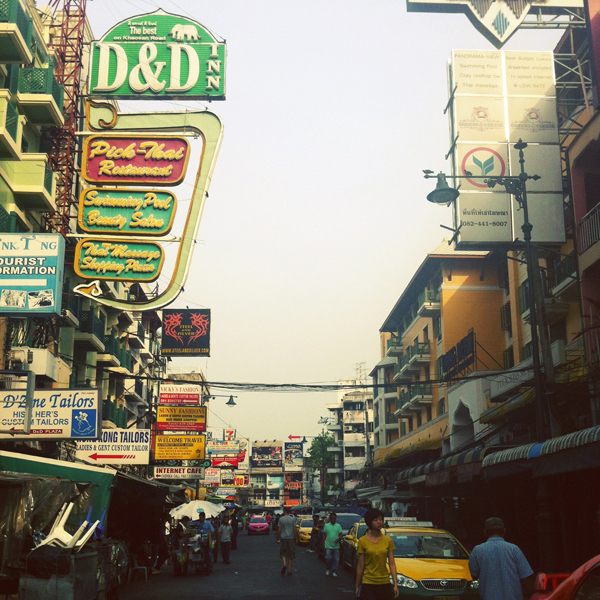 Well friends, we are back from another whirlwind trip to Thailand, and this trip was one of the craziest (and hottest) trips to date! We shopped till we dropped, we met amazing people, we ate, we drank and then we shopped some more! It definitely wasn't our smoothest trip and a lot of things went wrong, but that didn't stop us from having an amazing trip! 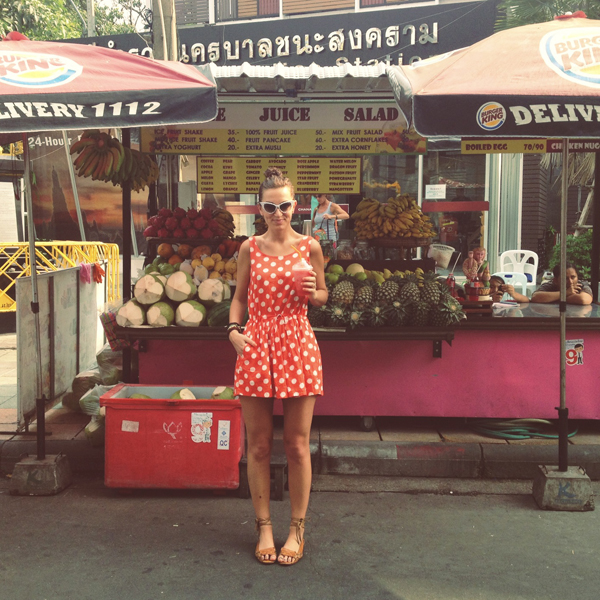 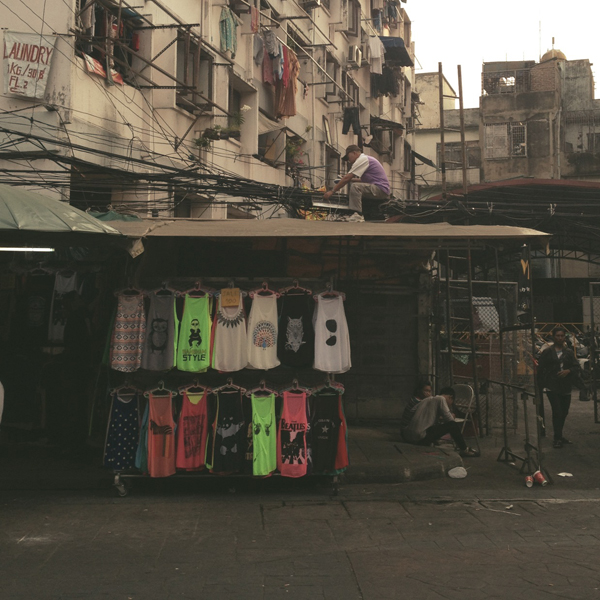 Khoa San Road in the morning...always something going down on that street! We don't envy the guy on the sketchy wires, that's for sure! 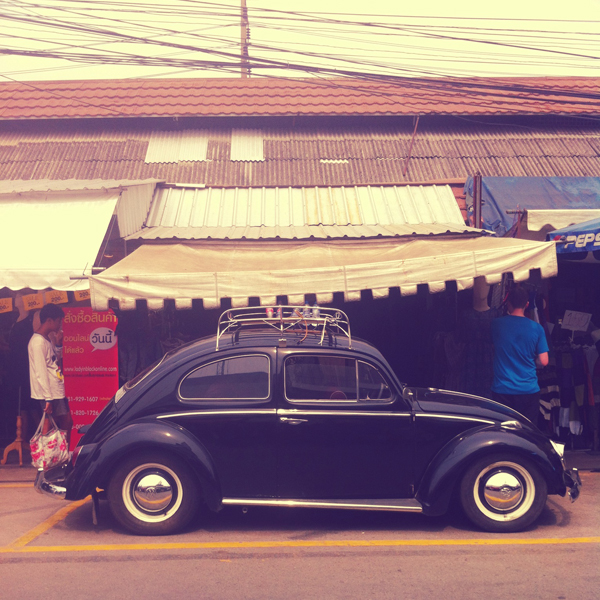 So after one day of doing some personal shopping, we headed to the Chatuchuk weekend market (also known as J.J. Market) where we spent the majority of two full days. Normally we have two weekends to spread our shopping (and our money) over, but the second weekend that we were in Thailand was Songkran which is the Thai's New Year water festival, so most things were closed. We shopped during Songkran a year ago and learned the hard way never to do that again! You get so soaked and traffic is mental, so we had to get everything done in one weekend which was a tad stressful and overwhelming. We managed to do it though, and we got some really incredible pieces for our shops as well as for ourselves!
How amazing is this car parked out in front of the shop that we did the most damage? 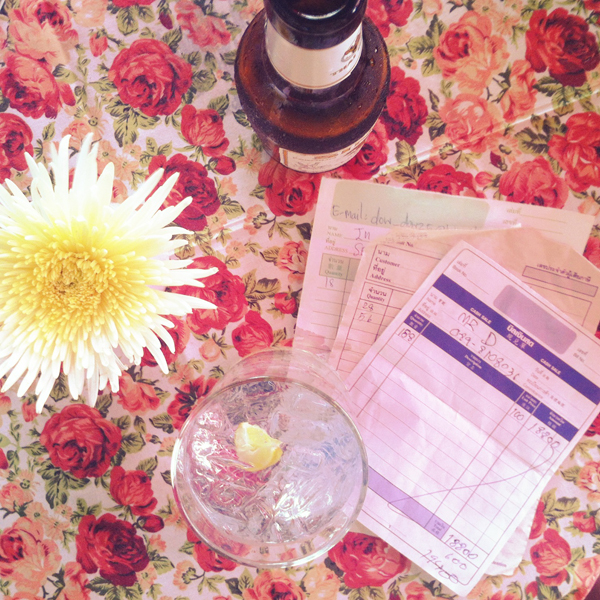 We had mini rewards for ourselves for surviving shopping in the 50 degree Celsius heat. They usually involved a gin & tonic or an ice cold beer and a snack. After every couple hundred pieces that we would buy, we would stop and take breaks like this. 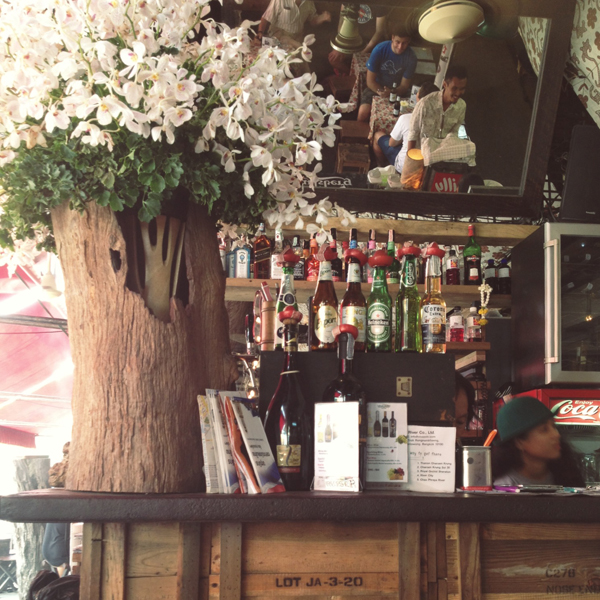 This was at our favorite resting spot in the weekend market. They had an awesome DJ, fans that blew mist, the most insane bunch of orchids we have ever seen, and of course ice cold drinks! 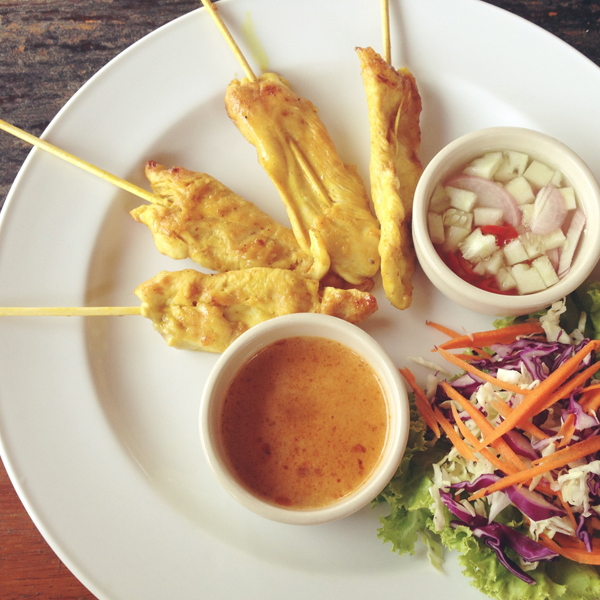 One of our staples? Chicken Satay with peanut sauce - yum! 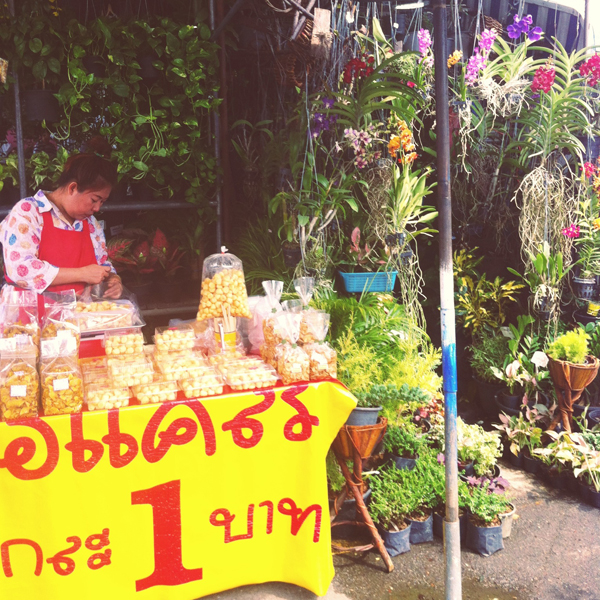 There are lots of beautiful plants and snack stalls to be found in the markets. 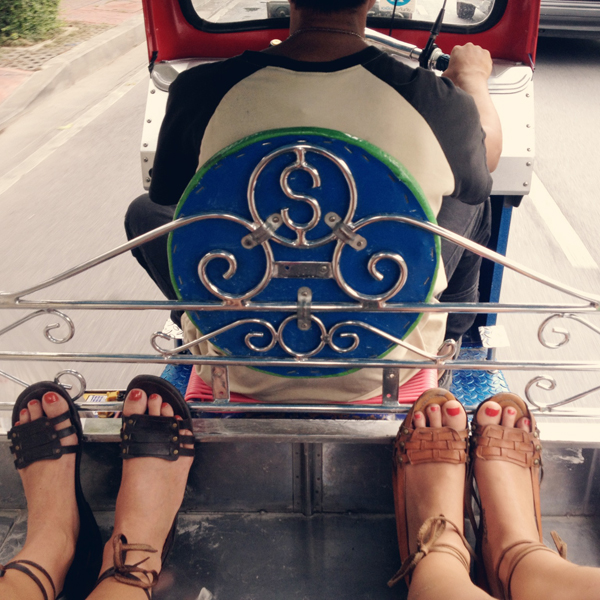 Our trusty mode of transportation was usually a tuk tuk because they are faster than taxis in traffic jams, and they are so cheap! We would usually take a tuk tuk on our way to shop, and then reward ourselves with an air conditioned taxi ride back to our hotel with all of our bags. 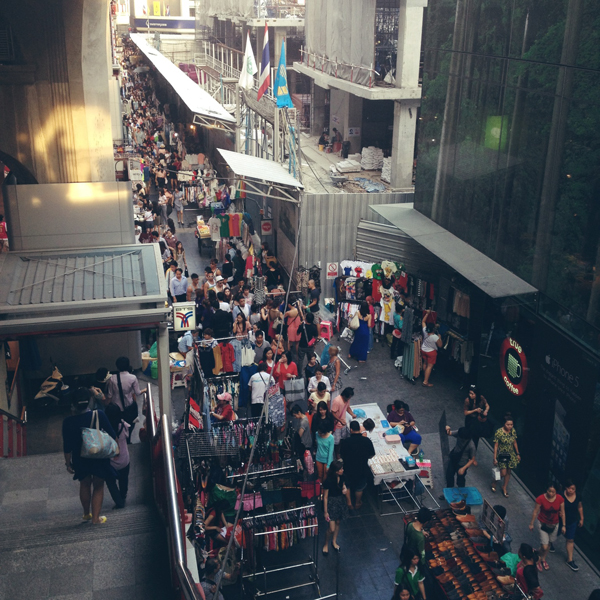 This was taken from above the Siam shopping area. The streets get super busy after 6pm but the shopping is so worth dealing with the jam packed streets! Siam Square is a huge area in downtown Bangkok close to a lot of the malls, of indoor and outdoor mini shops of mostly newer items. 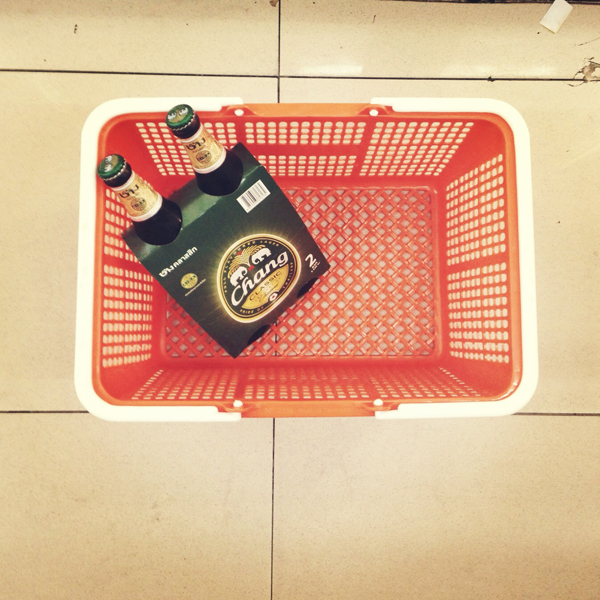 Like we said it was extremely hot while we were in Bangkok. April is Thailand's hottest and driest month and it felt hotter than ever before! Temperatures soared, but we always made it a priority to take breaks and drink lots of water and of course we had our fair share of Chang & Singha beer! 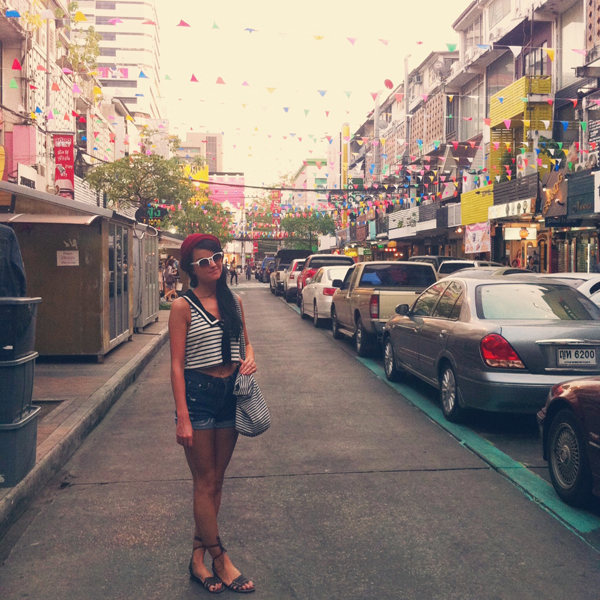 Stef shopping in Siam Square.
We were so focused on shopping that we almost forgot to take photos!
We love all of the color in this city! How cute are those little flags? 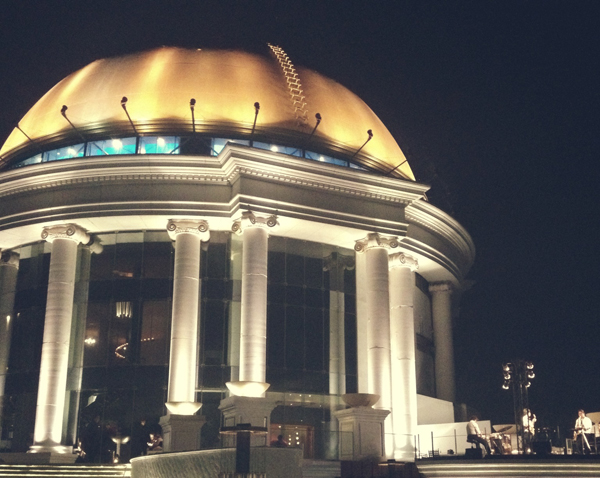 After our shopping was done we figured that we deserved to treat ourselves, so we ended up at Sky Bar at The Dome which is on the 63rd floor of the 5 star hotel Lebua. We found out after that it is the world's highest open air bar! Cocktails were far from cheap, but the breathtaking panoramic view of the entire city of Bangkok was more than worth it! It's also where part of the movie The Hangover 2 was filmed! 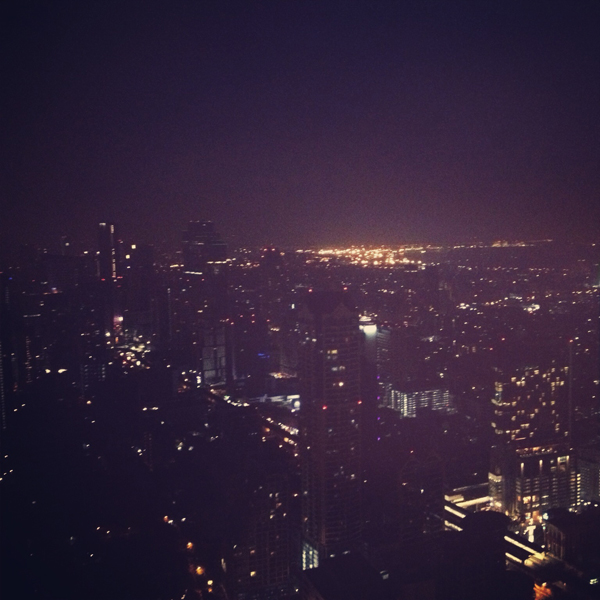 If only we could have captured how insane the view was... 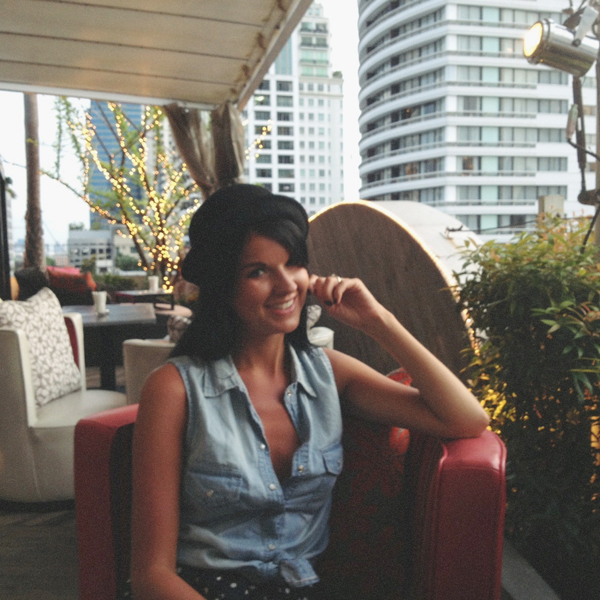 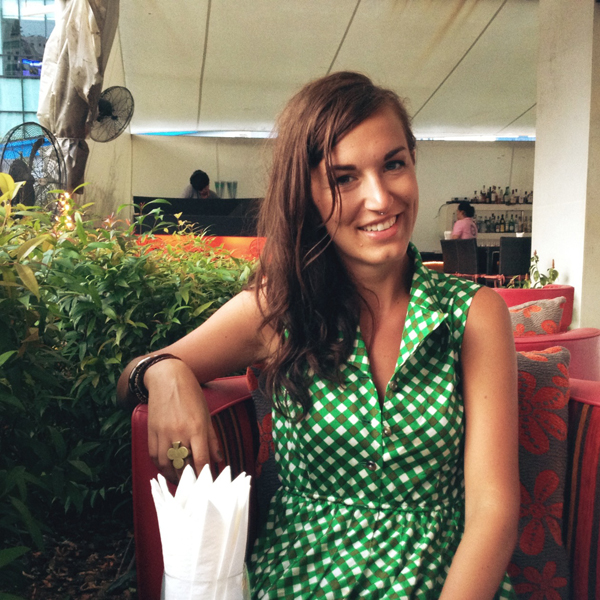 On our second last night in Bangkok we stayed at an amazing hotel called Le Fenix and they have a really amazing rooftop bar called Nest where we drank amazing cocktails and ate delicious mushroom gyoza and bruschetta and then called it a night. 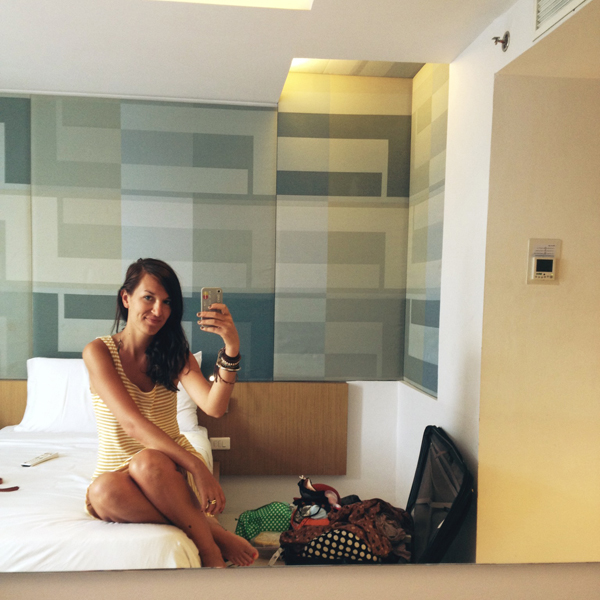 We both were under the weather on our last day, so we lay low, sat by the pool one last time, got a foot massage and then packed everything up and left for the airport. 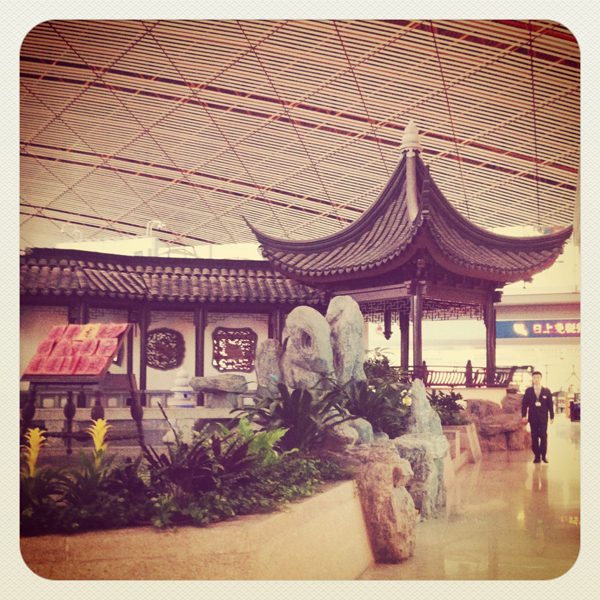 The long journey home took just over 40 hours with layovers and we got to stop in Beijing and had a bit of a crazy situation once we got to our hotel. So, as of April, China has changed their visa requirements and if you are there for under 72 hours you no longer need a visa. We knew this ahead of time but when we got to our hotel that we had booked they refused to let us into our room because we did not have a visa! We had taken an overnight flight from Bangkok and were completely exhausted, sick and freezing cold (it was only +1!) and were just wanting to lie down and rest before we continued our trek home. Long story short the hotel  told us to wait in the lobby while they called the police to come and deal with us! Obviously we weren't sticking around to deal with cops in a foreign country, so we tried to find a taxi (which was really hard to do at 6am on a quiet street in Beijing) back to the airport, and ended up getting a ride with a friendly driver. Well, as soon as we got to the airport there were 2 cops waiting for us and we were completely freaked out! We assumed the hotel had called them, but it turns out they were trying to catch our driver who was not a legitimate taxi driver and we had to file a police report after they caught him and after we were yelled at in Mandarin. Looking back it's a funny story, but at the time we were not so thrilled with the situation. We had to spend the next 12 hours in the airport with almost no restaurants/places to sit rather than a comfy hotel, but hey we made it back in one piece!
We have been back for a week already and so many opportunities have surfaced since we got back and we can't WAIT to spill the beans! We have what will probably be one of our busiest, most overwhelming, exciting and slightly scary weeks of our lives ahead of us, so if it's a little quiet over here we hope you understand! Wish us luck, say a prayer,  and cross your fingers and your toes that we can make it through the week!
Also, stay tuned for part 2 of our trip photos later this week!
xo
Erin & Stef
10:09 AM
Unknown
our daily lives, travel