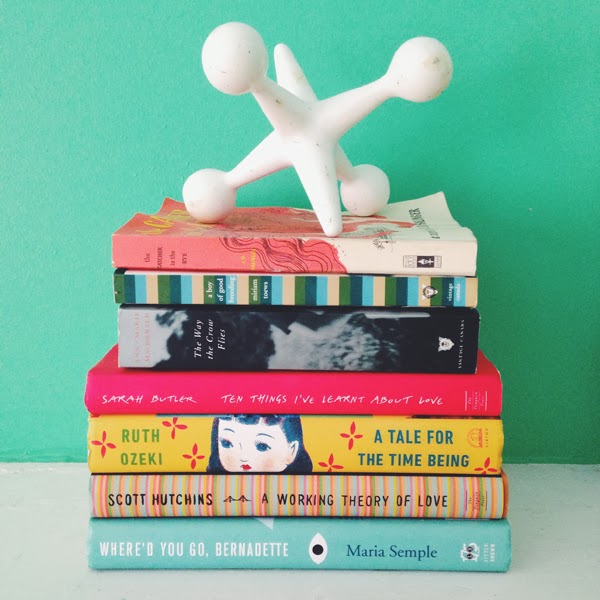 Like I shared earlier this month, one of my goals for 2014 is to read a book every week.
52 weeks, 52 books.
I have made it a habit to turn off the television and rather pick up a book, and every night before I go to sleep I try to read a little more. Once a month I am going to do a blog post both to share some of my favorite reads with you guys, as well as to hold myself accountable! If you guys have any good suggestions for books that I should read, please let me know! I'm pretty excited that I made it through the first 4 weeks, and look forward to the next 48 books that I plan on reading!

The first book I read was a doozy. It's called "Walk Across the Sun" and it's by Corban Addison. It's a pretty heavy duty read about two sisters who lose their entire family due to the tsunami and are then abducted and thrown into a brothel in Mumbai.
In the second week I read the book "Attachments" by Rainbow Rowell. It's a cute story about two women that work together and write each other witty emails knowing full well that their emails are being monitored. Little do they know, a boy named Lincoln is reading them and quickly falling in love with one of them. It's a pretty charming book.
I got a little behind in the third week, but got through "Orange is the New Black". I bought the book right after I binge-watched the show (which is incredible), but like most books-turned-movies/television shows, the book was even better. If you're not familiar with the show, it's a memoir by Piper Kerman who spent a year in a women's prison.
For the fourth week I finished "The 100-Year-Old Man Who Climbed Out the Window and Disappeared" by Jonas Jonasson. This book starts out on Allan's 100th birthday when he escapes the old folks home and starts out on a crazy adventure involving a briefcase full of cash, murder and many criminals. There were so many times I laughed out loud during this book, and I had a hard time putting it down. I highly recommend this one!
Ok, I'll be back here four weeks from now with another update!
XO, Erin
9:58 AM
Unknown
odds and ends