During the 60's some of the most iconic looks of our time were created! They may be a bit bold for everyday wear today, but it's still fun to try something new every now and then! Here are a few tips for achieving a retro look in the comfort of your own home... 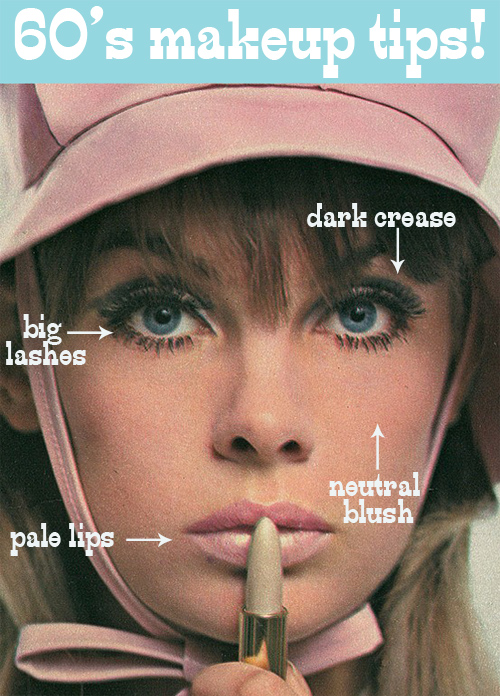 "The greatest changes in cosmetic style of the 20th century came about in the 1960's and still greatly influences how makeup artists work today." - an excerpt from Retro Makeup: Techniques for Applying the Vintage Look
Eyes: One of the most defining characteristics of 1960's makeup was the drastic change in eye makeup application. During the 1950's women tended to play it more on the natural side by wearing a neutral shadow paired with the classic winged liner, but by the mid 60's this has totally changed. The new thing to do was to darken the crease of the eyelid with shadow to create more rounded looking eyes. When creating this look at home be sure to only apply the dark shadow to the crease of the eye and keep the lid bare or apply a soft neutral. Women would also apply numerous coats of mascara to their top and bottom lashes and even add thick false lashes to give themselves a doe-eyed doll-like appearance. In the 60's it was all about the eyes!
Face: As far as face makeup goes, it was really kept rather simple. A pale foundation and concealer was applied all over to make the skin look as smooth as possible, and afterwards a very neutral blush was applied. None of the focus was to be taken away from the eyes so just a very soft pink or peach was added to the apples of the cheeks.
Lips: Another major difference from the 1950's to the 1960's was the lip color trends. In the 50's women would highlight their lips by painting them shades of bright ruby red, making them the focal point of their face, whereas in the 60's lips were almost de-emphasized and non-existent. In fact, women with particularly pink lips would cover them with concealer to achieve this neutral look. Pale pink lipsticks were popular, and even some metallic shades were introduced! Quite a difference from the Marilyn Monroe look to the Jean Shrimpton, hey?
Have fun experimenting, lovelies!
xo
(photo source.// information source.)
8:48 AM
Unknown
fashion, The 50's and 60's