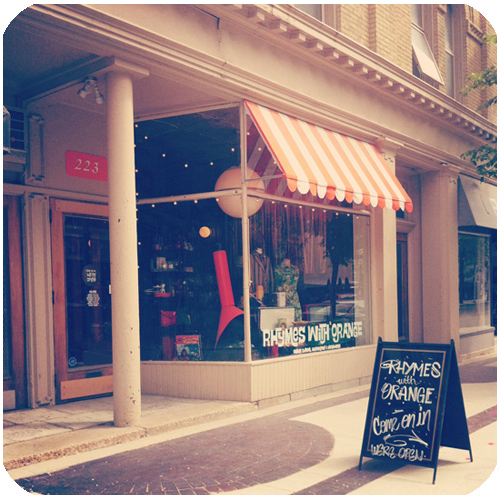 Hello friends! We just thought that we would check-in and give you a little update on how things have been going at our vintage boutique. It's hard to believe that it's already been six months since we first opened our doors! Seriously, it's been half a year already? Wow, time sure does fly when you're having fun! We were really lucky to have an unseasonably warm winter this year, which resulted in quite a bit more foot traffic than we had originally anticipated, and now that the snow has melted we have been busier than ever!
We also recently received two very exciting press mentions that we wanted to share with you: First, a local newspaper called Uptown Magazine took a poll and we were voted #2 for 'Winnipeg's Best Vintage Shop' and we were also voted #2 for 'Best New Shop in Winnipeg'! Forever 21 beat us for best new shop, but really, being second to Forever 21 is still a huge compliment!
Secondly, we recently did an interview for a Swedish newspaper called Svenska Dagbladet which we were told is Sweden's version of the New York Times! What an honor! The interview was primarily about our mobile shop and will hit news stands next Saturday. We can't wait to get our hands on a copy!
Speaking of our mobile shop, we have our first event of the year booked! We will be participating in the Canada Day festival again this year and that takes place on June 30 & July 1st in Osborne Village in Winnipeg. So, if you live nearby feel free to come by and say hello!
Alright, that's all for now lovelies, we hope you have a fantastic weekend!
XO,
Stef & Erin
12:31 PM
Unknown
brick and mortar shop, press